What exactly is inflammatory bowel disease? It occurs when the body’s natural immune response begins to attack itself, inflaming the gastrointestinal tract and destroying the mucosal lining that protects the bowels. To avoid costly invasive surgery, new therapies beyond traditional multidrug treatments are being explored. One of the most promising is regenerative treatment: using stem cells to regrow the damaged tissue in ways that don’t just mask the symptoms or temporarily protect the damaged GI tract.

Here’s how inflammatory bowel conditions work: The epithelial cells that generate the protective mucus become damaged as they are attacked by the body’s own autoimmune responses, and become unable to offer the body the protection it needs in the lining of the colon. Ulcers and bleeding develop as the intestines become unable to stop the bacteria from eroding the lining. 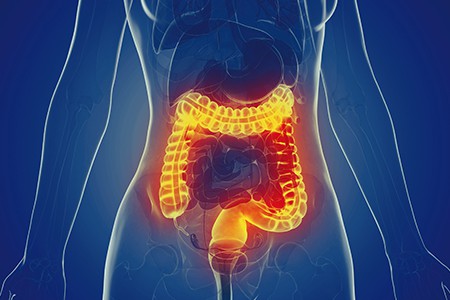 Ulcerative colitis and Crohn’s disease are the two major types of IBD, and more cases have been reported in recent years. Causes range from genetic predisposition to factors in the patient’s environment and lifestyle, such as diet, socioeconomic status and psychological responses to stress. While there are many contributing factors, the exact triggers are unclear, making treatment difficult. What might work for one person might not work for the next, since the factors are so varied.

Because of its incredible importance in our bodies, the GI tract is its own microbiome. Its job is to protect us with good bacteria and maintain a balance to keep us immune from invading diseases. When this balance is thrown off, the system begins to attack itself, undermining the very structures that are designed to protect us.

The colon can develop ulcers, causing intense pain and often requiring hospitalization. Introducing mesenchymal regenerative cells can stimulate the growth of intestinal stem cells, which grow and regrow the protective layer that keeps the colon healthy.

In fact, recent studies have shown that the use of stem cells in treating IBD is more effective than traditional conventional treatments, and is just as safe, especially in treating Crohn’s disease.

In the case of Crohn’s patients who were treated with stem cells, the results were so striking that clinical studies were expanded to include other types of IBD, like ulcerative colitis. In the first controlled study of regenerative cell treatments, colitis was sent into remission with extended remission rates over three to five years between 45- and 100-percent. Since there have been no reported adverse effects of using mesenchymal or allogenic stem cells to treat inflammatory bowel problems, this is promising news for IBD sufferers.

Freedom from the pain and danger of ulcers and other complications is the goal of anyone who suffers from this family of diseases. Stem cell therapy for inflammatory bowel diseases show promise in ways that may well supercede traditional therapies.

At the very least, using an all-natural means to address such a serious health issue is a treatment worth exploring, and thankfully the medical community is beginning to embrace the power that regenerative medicine has to restore balance and health to damaged tissue, including that associated with IBD.